His academic journey has been a learning curve throughout.

He graduated (MBBS) from Medical College, Kolkata, the first medical institution not only in India but also in whole ASIA . He did his post graduate (MS) in Gyne & Obs from Vivekananda Institute of Medical Sciences,Kolkata known as Sishumangal Hospital. Sishumangal Hospital is considered one of the best superspeciality hospital in kolkata. Later he joined in the department of Gynaecology & Obstetrics,Sishumangal Hospital, Kolkata as senior resident. He spent almost 2 years there learning and performing complex Gynaecological surgeries, Laparoscopic Surgery and Infertilty Management throughout his residency period. During this period he worked with Dr P Das Mahapatra, Spectrum Clinic, Kolkata to enhance his laparoscopic surgical skill. 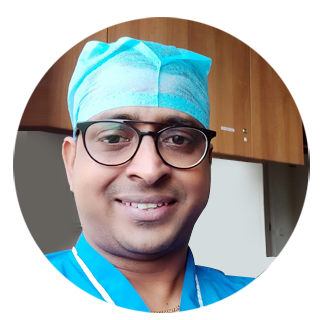 Coming back from Pune he joined at Ramakrishna Mission Seva Pratishthan (Sishumangal Hospital) in 2015 in Gyne & Obs department. Here he did many Laparoscopic Gynaecological Surgeries, published many papers as well as trained junior doctors about laparoscopic surgeries.

He had the opportunity to undergo Fellowship in Minimal Access Surgery (FMAS). He Underwent training in Gynaecological and Obstetrics Ultrasonography for six months under guidance of Dr A K Roy at Health Care Diagnostic Centre, Kolkata .

. He joined at Bhagirathi Neotia Women and Child Care Center, Kolkata as Senior Registrar. Later he joined at Charnock Superspecialty Hospital, Kolkata in the department of Gyne & Obs and Advanced Laparoscopic Surgery as Junior Consultant in 2017. Now he is working there as Visting Consultant.