If you and your partner are struggling to have a baby, you're not alone. Infertility is defined as not being able to get pregnant despite having frequent, unprotected sex for at least a year for most couples. Infertility may result from an issue with either you or your partner, or a combination of factors that prevent pregnancy. Fortunately, there are many safe and effective therapies that significantly improve your chances of getting pregnant.

How Does the Doctor Determine If I Am Infertile?
To determine whether you are infertile, your doctor will go over your health history, medications, sexual history, and sex habits, like how often you have sex.

Men will get a physical exam and often a sperm analysis, which tests the health of the sperm.

For a woman, testing begins with a medical history and physical exam, including a pelvic exam. The doctor then makes sure that she ovulates regularly and that her ovaries are releasing the eggs. Blood tests are taken to measure hormone levels. The ovaries and uterus may be examined by ultrasound, and a specific X-ray test can check the uterus and fallopian tubes.

In about 80% of couples, the cause of infertility is either an ovulation problem, blockage of the fallopian tubes, or a sperm problem. In 5%-15% of couples, all tests are normal, and the cause is not known 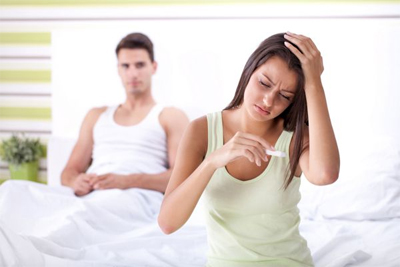 When to see a doctor
You probably don't need to see a doctor about infertility unless you have been trying regularly to get pregnant for at least one year. Women should talk with a doctor earlier, however, if they:
1) Are age 35 or older and have been trying to conceive for six months or longer
2) Are over age 40
3) Have irregular or absent periods
4) Have very painful periods
5) Have known fertility problems
6) Have been diagnosed with endometriosis or pelvic inflammatory disease
7) Have had multiple miscarriages
8) Have undergone treatment for cancer

All of the steps during ovulation and fertilization need to happen correctly in order to get pregnant. Sometimes the issues that cause infertility in couples are present at birth, and sometimes they develop later in life.

1) Abnormal sperm production or function due to undescended testicles, genetic defects, health problems such as diabetes, or infections such as chlamydia, gonorrhea, mumps or HIV. Enlarged veins in the testes (varicocele) also can affect the quality of sperm.

3) Overexposure to certain environmental factors, such as pesticides and other chemicals, and radiation. Cigarette smoking, alcohol, marijuana, anabolic steroids, and taking medications to treat bacterial infections, high blood pressure and depression also can affect fertility. Frequent exposure to heat, such as in saunas or hot tubs, can raise body temperature and may affect sperm production.

4) Damage related to cancer and its treatment, including radiation or chemotherapy. Treatment for cancer can impair sperm production, sometimes severely.

1) Ovulation disorders, which affect the release of eggs from the ovaries. These include hormonal disorders such as polycystic ovary syndrome. Hyperprolactinemia, a condition in which you have too much prolactin — the hormone that stimulates breast milk production — also may interfere with ovulation. Either too much thyroid hormone (hyperthyroidism) or too little (hypothyroidism) can affect the menstrual cycle or cause infertility. Other underlying causes may include too much exercise, eating disorders or tumors.

2) Uterine or cervical abnormalities, including abnormalities with the cervix, polyps in the uterus or the shape of the uterus. Noncancerous (benign) tumors in the uterine wall (uterine fibroids) may cause infertility by blocking the fallopian tubes or stopping a fertilized egg from implanting in the uterus.

3) Fallopian tube damage or blockage, often caused by inflammation of the fallopian tube (salpingitis). This can result from pelvic inflammatory disease, which is usually caused by a sexually transmitted infection, endometriosis or adhesions.

4) Endometriosis, which occurs when endometrial tissue grows outside of the uterus, may affect the function of the ovaries, uterus and fallopian tubes.

5) Primary ovarian insufficiency (early menopause), when the ovaries stop working and menstruation ends before age 40. Although the cause is often unknown, certain factors are associated with early menopause, including immune system diseases, certain genetic conditions such as Turner syndrome or carriers of Fragile X syndrome, and radiation or chemotherapy treatment.

6) Pelvic adhesions, bands of scar tissue that bind organs that can form after pelvic infection, appendicitis, endometriosis or abdominal or pelvic surgery.