Polycystic ovary syndrome (PCOS) is a condition that affects a woman’s hormone levels.

Women with PCOS produce higher-than-normal amounts of male hormones. This hormone imbalance causes them to skip menstrual periods and makes it harder for them to get pregnant.

PCOS also causes hair growth on the face and body, and baldness. And it can contribute to long-term health problems like diabetes and heart disease.

Read on for a look at the causes of PCOS and its effects on a woman’s body.

PCOS is a problem with hormones that affects women during their childbearing years (ages 15 to 44). Between 2.2 and 26.7 percent of women in this age group have PCOS

Many women have PCOS but don’t know it. In one study, up to 70 percent of women with PCOS hadn’t been diagnosed

The ovaries release eggs to be fertilized by a man’s sperm. The release of an egg each month is called ovulation.

Follicle-stimulating hormone (FSH) and luteinizing hormone (LH) control ovulation. FSH stimulates the ovary to produce a follicle — a sac that contains an egg — and then LH triggers the ovary to release a mature egg.

PCOS is a “syndrome,” or group of symptoms that affects the ovaries and ovulation. Its three main features are:
• Cysts in the ovaries
• High levels of male hormones
• Irregular or skipped periods

In PCOS, many small, fluid-filled sacs grow inside the ovaries. The word “polycystic” means “many cysts.”

These sacs are actually follicles, each one containing an immature egg. The eggs never mature enough to trigger ovulation.

Extra male hormones disrupt the menstrual cycle, so women with PCOS get fewer periods than usual. 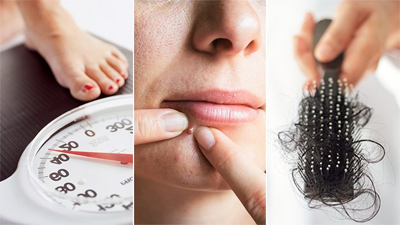 Genes, insulin resistance, and inflammation have all been linked to excess androgen production.

Some women start seeing symptoms around the time of their first period. Others only discover they have PCOS after they’ve gained a lot of weight or they’ve had trouble getting pregnant.

The most common PCOS symptoms are:

1) Irregular Periods. A lack of ovulation prevents the uterine lining from shedding every month. Some women with PCOS get fewer than eight periods a year.

2) Heavy bleeding. The uterine lining builds up for a longer period of time, so the periods you do get can be heavier than normal.

3) Hair growth. More than 70 percent of women with this condition grow hair on their face and body — including on their back, belly, and chest (11). Excess hair growth is called hirsutism.

4) Acne. Male hormones can make the skin oilier than usual and cause breakouts on areas like the face, chest, and upper back.

5) Weight gain. Up to 80 percent of women with PCOS are overweight or obese.

6) Male-pattern baldness. Hair on the scalp gets thinner and fall out.

7) Darkening of the skin. Dark patches of skin can form in body creases like those on the neck, in the groin, and under the breasts.

8) Headaches. Hormone changes can trigger headaches in some women.